Home for the Holidays!

yep. sometimes i make bad decisions. and now i'm paying for them. i take FAR in two weeks and still have 5 lessons, all the homework, and all the simulations to do. boo and boo. oh wait. and then a mere 2.5 weeks later i take BEC.
if you don't see me for a few weeks, you'll know why. and if you do see me, please make me go study... 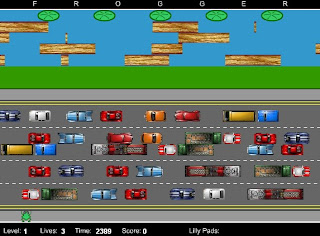 remember when everyone had games on their calculators? it was super high tech to have tetris or poker or that drug mafia game on your TI-83. and when you were playing in class, it just looked like you were doing a complicated math problem and not playing a game. well, remember the game frogger? you had a little frog and you had to get him through several lanes of cars and trucks, safely to the other side. it was a classic.

today i played my own game of human frogger. and it was definitely unintentional. i was late late late to church. the local trains weren't running downtown (which i discovered after i was already down in the subway) and there were no cabs to be found so i schlepped it down to 65th for church. i was so close-i just had to cross columbus and i was safe! and not super late. so the light for the traffic was red. i didn't know how long it had been red for so i figured i had enough time to cross the 5 lanes of traffic and get to church on time. i leapt over a puddle and started my trek across the street. the light changed to green as soon as i had crossed one lane (ie i still had 4 lanes of NY traffic to cross).
you would think that the nice taxi drivers would stop and let me scamper across the street safely. not a chance. they all start driving and i'm standing in a sea of cars, trying to make it across the street in one piece. luckily, a few cars had pity on me and let me stop to cross the street. and luckily, i made it across still intact and made it to church mostly on time!
moral of the story: maybe it's a good idea to watch the lights a little closer to avoid any further human frogger experiences...

today i was supposed to study for the CPA (which i am taking in approximately 3 weeks). i still have 7.5 lessons to do, several hundred homework problems, and a handful of simulations. INSTEAD i went to brunch at elephant and castle, i shopped in soho (oh my, i love shopping in NYC), i caught up on The Hills and The City, and went to a spin class which was hands down the WORST spin class i have ever been to. oh how i miss todd's class.

the big news of the day though-i got a blackberry! i am super excited and i'm sure it does wonderful things. the only problem is i have absolutely no idea how to use the thing. anyone want to volunteer to give me blackberry lessons??

Weekend in Italy anyone?

I get these TravelZoo emails with fantastic travel deals every week. Today one of the deals was a weekend in Italy for only $499!!! It includes airfare, 3 nights hotel, and breakfasts for a bunch of different weekends in January/February. Who wants to come with me??

so before i moved out here, chelsea and i would joke about having "the city" moments in NY. you know what i mean-those cheesy, totally scripted conversations at some cute restaurant in soho or the meatpacking district. of course we would wear shoes we could barely walk in, and talk with absolutely no emotion. it would be wonderful and hilarious.

tonight i was in soho for dinner with some friends and who did i see, sitting on the curb chatting on her phone?
KELLY CUTRONE
no one that i was with watched the show. or knew who she was. but it was totally her. and yes, she is just as scary is she seems on the show. and she's kind of dirty and gross. strange that she's a fashion designer... i wanted meet her but was a lot bit terrified of her. ha ha ha. i was still excited about it-my first NY "celeb" sightseeing experience (if you can consider her a celeb). hopefully there will be many more to follow!

I'm going to Vermont this weekend! I am seriously excited to see all of the leaves and be in nature! Get excited for fall photo shoot pictures to follow...

Check out this from Lara's blog...excuse the super sick picture of me. I think I may be going through an ugly ducking stage right now. Ha ha ha.

About the hair, sister said it kind of looked like something was sick in my hair. Thank goodness we did it somewhere no one would really notice it...

Today work was slower than slow. You can only muck around on the internet for so long until even that loses its appeal. Maybe when they send me to CT (that's right, I'm going back to CT-remember this?) I'll actually be busy?

Today I got my corporate credit card in the mail and my business cards are on the way! I'm officially official! Yay!
Today I went to the grocery store and remembered why I choose to grocery shop online. Whoa. Overwhelming. I might as well be grocery shopping in a foreign country. Apparently I need to learn the NY grocery shopping protocol.
Today I discovered the most AMAZING orange juice at the grocery store! Turns out I forgot to add orange juice to the freshdirect order so I stopped in at Fairway. They sell fresh squeezed orange juice by the half gallon! (probably by the gallon but the size of my fridge prevents such a purchase) I tasted it when I got home-it really is fresh squeezed! Best orange juice from a container ever!
Today I realized I'm on a first name basis with the salesperson in Papyrus. It's a little bit dangerous living right around the corner...

A run-in with the NYPD

I am not a good driver. I am not the worst driver ever, but I don't think I'm wonderful at driving. I actually don't really love driving, which was one of the reasons I was so excited to come to NYC-no driving!! Somehow, I managed to make it 6 years only getting pulled over twice and ticketed once.

Now rewind to about 3 weeks ago. I was on the subway coming into work. I had been at work until all hours of the morning the few days before. The train was nearly empty since I was almost to the end of the line. I decided to put my feet on the seat next to me and take a little nap until I got to my stop. The next thing I know, a cop is shining his flashlight at me and beckoning me to get off the train. I get off and go to talk to the cop. He asks if I know why he pulled me off the train. I questioned as to whether it was because my feet were on the seat? That was the only possible explanation I could think of, although that really didn't seem to make much sense to me. He told me that it was and that he was going to have to write me a ticket. WHAT?!? A ticket for having my feet on the seat?!? I told him that I seriously had no idea it was against the law to put your feet on the seat, and that I had just moved to the city 2 weeks before, and asked if there was any way he could let me off with a warning.

He told me no. Flat out no. He assured me that it wouldn't go on my criminal record, that it was like a parking ticket (which ps-I've never gotten a parking ticket!!). No matter what I said, I couldn't get the man to just waive my ticket. He did tell me though, that if I called the number on the back of the ticket and explained what happened, told them I was new in the city, etc etc they would most likely waive or dismiss the ticket. He gave me the ticket and left me standing on the platform, late for work, and waiting for another dumb train to come.

So this morning I finally called the number. I had been putting it off because I was a little scared to call. The lady on the phone tells me that they don't waive tickets over the phone and I'd have to appear for a hearing. Um. No thank you. There goes $50, to the Public Transit Authority whatever. Boo and boo.

I feel like only I could make it 6 years, driving like I do, and only getting one ticket, but then manage to get a ticket on the subway after only 2 weeks in the city!

So today I found out that one of my all-time favorite magazines is closing. Sad and sad. The magazine had awesome recipes and cool articles about wonderful places to travel and eat. Hopefully it's sister magazine Bon Appetit won't follow in it's footsteps...

Does anyone have renter's insurance? Do I need it? Who did you go through? How does it even work? Any suggestions or tips would be appreciated!! I'm thinking I should've paid more attention in that personal finance class I took a year ago...

I may have been a teenie (teeny?) bopper back in the day. My first concert ever was The Backstreet Boys at the E-Center in SLC with my Daddy. I own all of the CDs, had their pictures up all over my room (I think at one point I had a subscription to Big Bopper...ha ha ha). I got up in the middle of the night to stand in line for concert tickets. The teeny bopper phase may have continued into my college years a little bit. I may or may not have gone to Walmart at midnight with Kelsie the day that the BSB new CD came out a couple years ago. We went kind of to be funny, but kind of to be serious. And of course we listened to the whole CD before we made it back home.

Imagine my excitement when I discovered this! That's right friends. Backstreet's Back! The new CD comes out Tuesday! Ha ha ha ha ha....

I kind of like the abbrevs. You know-like abbreviations. I think that perf is my favorite. Awes. Another one I have become fond of-sitch. As in situation. Remember that dumb cartoon Kim Possible? She used to say sitch all the time. One day Lara and I decided we'd get really into acronyms. NGH. LFA. PBHA. We may use these in coversation regularly. Yesterday at work I had an entire convo with my friend using only the first letters of each word. We actually got pretty good at figuring out what the other was trying to say. LI.

One of these days I'll get around to taking some pictures of the new apartment. PS-I'm still looking for decoration ideas. Suggestions are appreciated.