This weekend was a lovely one. As always, it went by way too quickly and I didn’t get everything done that I wanted to.

Friday
Friday night we got to go to my dear friend Amber’s wedding dinner!! It was held up at Log Haven. I had never been up there before-it was so lovely!!! It was a great evening-Amber looked beautiful and oh so happy! Dinner was delish and I got to see Lara which is always great-she just needs to move back to Utah already!  :) 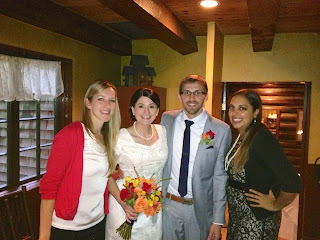 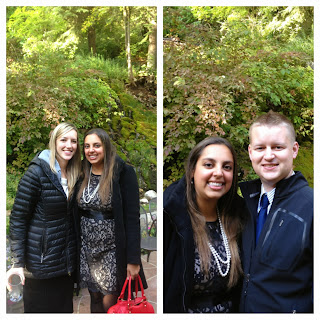 Saturday
Saturday was a lovely day. I got a massage in the morning! When I become rich and famous, I’m going to have a personal masseuse. Wouldn’t that be so fantastic?!?

Saturday afternoon Jeremy and I went to lunch and went to the Leonardo. They had a fun Halloween exhibit. I got to take my picture in a coffin!! The Leonardo is my kind of museum because there are so many hands-on things. I am always wanting to touch things in museums and this is one where you actually can! 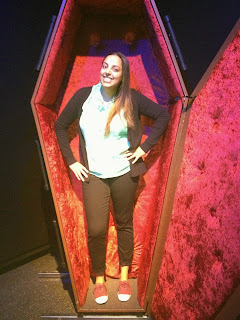 Saturday evening was the Relief Society broadcast. Our stake did a little dinner before which was nice. Then afterwards I did some grocery shopping and had a low-key evening watching Now You See Me with Rissa and Jeremy.

Sunday
Sundays are just the best. It’s so nice to have a day to not have to do anything. I made a delish breakfast of Crème Brulee French toast! I just love breakfast!! Church was just normal church. For dinner we had the Shermans over which was a lot of fun. It was a nice, relaxing Sunday, just how it should be.

Up Ahead
This week should be a fun one-Junior League meeting, more quilting time, some hot yoga, and a weekend escape to St George!


(This was written last week, I just never got around to posting it. Oops!)

This weekend was a good, busy weekend. Lots of fun things happening!

Friday
Friday evening I did the electric run!! It was a super fun 5k at down at Thanksgiving Point. They do it at night and everyone wears glow sticks, neon, and fun glow in the dark things. We had a team called Girls on Fire so Jane, Marissa, and I made shirts that each had a word on them. We’re so crafty!

I have been strangely ill and haven’t run in ages upon ages. Jane and Marissa were nice enough to walk the 5k with me instead of running. The whole race was pretty great. They had lots of fun lighted things and glow in the dark things. It was a very low key race with runners and walkers and people just having fun.

By far though, the best part was running into the folks from ABC’s The Bachelor!!!!!! Earlier that day, I had found out that Juan Pablo would be filming one of his dates at the race so we were on the lookout for them the entire time.  Luckily enough, we actually found them!!! We were just walking along and saw a couple golf carts with people with cameras. We asked them if they were from ABC but they wouldn’t say anything. Then we looked ahead and saw a big crowd of people with a camera aimed at them. The only time we ran during the whole race was to catch up with JP. We stuck with them for a little bit and at one point Juan Pablo may or may not have actually stepped on me. I’m totally going to be on TV. Get excited!


After we got our fill of JP, we carried on a finished the race. At the end they had a stage and a DJ, people were dancing and such. We stuck around for a little bit, got our rave on, took some photos, then headed home. It was such a fun race and if I hadn’t have been sick it would’ve been fun to stay around and hang out. Definitely going to do it again next year!

Saturday
Saturday morning I had a Junior League field trip! Have I mentioned that I’m joining the Junior League?! I’m quite excited about it-I’ve been wanting to join for years but when I was living in NYC I didn’t have the time. Now I have all kinds of time so Junior League here I come! Saturday morning we met and went on a tour of past Junior League projects. It was really cool to see what they have been involved in in the past and what am impact they’ve made.

Saturday night Jane and I hosted our own Diner en Blanc. Diner en Blanc is this fabulous event hosted in cities around the world. I have never been to an official Diner en Blanc but last year some people held one in SLC. When we found out they weren’t having one this year, we decided to have our own mini dinner party version. It was a lot of fun. We had great company and delicious food, and the weather was perfect for sitting out on the porch!

Up Ahead
This week should be a good one-and for once it’s actually not crazy busy! Some hot yoga, quilting time with Caroline, and Lara’s in town!