A Night with Elton

So Wednesday morning as I was riding the subway to work, reading the Metro, I came across an interesting article. It talked about the Tribeca Film Festival and events that were going on to celebrate the opening of the festival. Well, one of the events of opening night was a showing of the documentary The Union followed by a performance by Sir Elton John! Even better news-he was playing right in the World Financial Center (where I work) and anyone could get tickets! When I got into the office I told my coworkers and after convincing them that I was not making it up, a group of us decided to take a field trip during work to see if we could get tickets.

We waited in line for longer than anticipated, but we ended up getting in! YAY!! Excitment was in the air the rest of the afternoon as we anxiously awaited Elton time!! They showed the movie outside by the water.Thankfully it was not raining but it was colder than cold, and I was unprepared to spend an entire evening outside so I froze my face off. The movie was interesting- it talked about Elton and Leon Russell (who I had never heard of) and their colaboration for their recent album. By the end of the movie, I was freezing and anxious for it to be over.


When EJ came on and started singing though, it was worth it! He started off with Tiny Dancer, one of my favorites. Then played an interesting rendition of Rocket Man, a few songs from his new album, I Guess That's Why They Call It the Blues, and ended with Your Song, one of my favorites. He is such a great performer and is so amazing on the piano! I am convinced that I must see a full Elton concert. It was a great night and definitely worth the wait in the cold!! 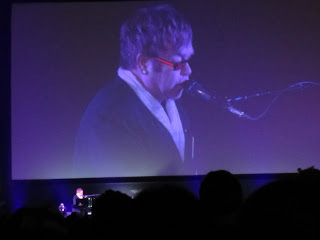 This is a photo of the screen-we were kind of far away but you can see tiny live Elton in the bottom left corner...ha ha﻿